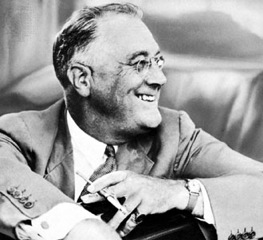 When talk of Barack Obama and Franklin Roosevelt are together it is usually in reference to ineffective big government policies and Great Depression(s). While there are certainly many similarities there, FDR and Obama part ways when it comes to their view of our Christian heritage and the role it plays in America’s soul.    There has been a lot of attention recently on efforts to radically secularize our military and to view the Christian faith in particular as a menace.   This would have shocked America’s 32nd president who had a much more positive view of the role of faith in our armed forces.