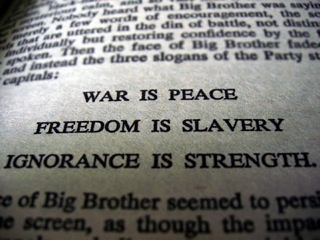 “Postmodernism” is a description of the prevailing worldview of our current times in which truth is in the eye of the beholder.  A past truth can be dismissed with the response of “well that’s what’s right for you.”  One consequence of such relativism is the loss of meaning of important words like truth, freedom, right, wrong, bravery, decency, To many who share the values of AFA of Indiana the world seems to be upside down.  Things once seen as wrong are held up as good and matters once considered virtuous, are now widely mocked.  Cultural commentator and Washington Times columnist Robert Knight weighs in on some current examples of this confusion in his column, Twisting Words into Doublespeak.