(CNSNews.com) – Released American pastor Andrew Brunson thanked President Trump Saturday for fighting for his freedom, and prayed in the… 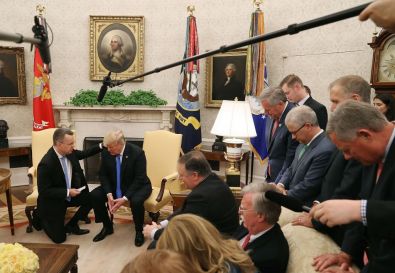 (CNSNews.com) – Released American pastor Andrew Brunson thanked President Trump Saturday for fighting for his freedom, and prayed in the Oval Office for God to give the president “supernatural wisdom to accomplish all the plans you have for this country and for him.”

Brunson, an evangelical pastor who was incarcerated or under house arrest in Turkey for two years while on trial on terror and spying charges, flew home after judges ordered his release. (The court convicted him on a terrorism charge, sentenced him to three-and-a-half years’ imprisonment, but ruled he should spend no more time in jail.)

“From a Turkish prison to the White House in 24 hours,” Trump said while meeting with Brunson and his family and supporters. “That’s not bad.”

“We especially want to thank the administration,” the pastor told him. “You really fought for us – unusually so. From the time you took office, I know that you have been engaged, and Secretary of State Pompeo also was very engaged and fought for us, and Vice President Pence, we are very grateful, Mr. [National Security Advisor John] Bolton.”

Brunson also thanked senators who had visited him in prison in Turkey and “who stood with us and who prayed for us and who fought for us.”

Trump noted that lawmakers from both parties had advocated for his release: ‘Honestly, I think if there was ever a bipartisan event, this was it.”

Brunson asked Trump if he could pray for him, telling him that he and his wife Norine often do so.

“Thank you. Well, I need it probably more than anybody in this room,” Trump said.

Brunson then knelt, and with a hand on the president’s shoulder, prayed:

“Lord God, I ask that you pour out your Holy Spirit on President Trump, that you give him supernatural wisdom to accomplish all of the plans you have for this country and for him.

“I ask that you give him wisdom in how to lead this country into righteousness.

“Fill him with your wisdom, and strength, and perseverance. And we bless him. May he be a great blessing to our country. In Jesus’ name, we bless you. Amen.”