WASHINGTON (October 7, 2018) — The bitter battle over Brett Kavanaugh’s nomination to the Supreme Court has exacerbated the nation’s… 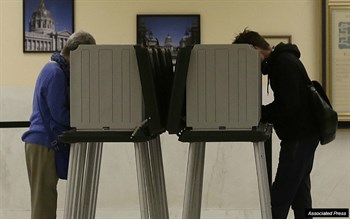 WASHINGTON (October 7, 2018) — The bitter battle over Brett Kavanaugh’s nomination to the Supreme Court has exacerbated the nation’s political divide and left many Americans emotionally raw. It’s also given new definition to the high stakes of November’s election.

Until now, the fight for control of Congress has largely been viewed as a referendum on President Donald Trump’s first two years in office. But the turmoil surrounding Kavanaugh has transformed the midterms into something bigger than Trump, with implications that could endure long after his presidency. The election is suddenly layered with charged cultural questions about the scarcity of women in political power, the handling of sexual assault allegations, and shifting power dynamics that have left some white men uneasy about their place in American life.

Both parties contend the new contours of the race will energize their supporters in the election’s final stretch. And both may be right.

Republicans, however, may benefit most in the short term. Until now, party leaders — Trump included — have struggled to energize GOP voters, even with a strong economy to campaign on. The president’s middling job approval rating and independent voters’ disdain for his constant personal attacks have been a drag on GOP candidates, particularly in the more moderate suburban districts that will determine control of the House.

But Republican operatives say internal polling now shows Kavanaugh’s acrimonious confirmation has given the party a much-needed boost, with GOP voters viewing Democrats as overzealous partisans following the public testimony by Kavanaugh and Christine Blasey Ford, who accused the judge of trying to rape her while they were both in high school. Ford said she was “100 percent” certain that Kavanaugh was her attacker, while the judge steadfastly denied her allegations.

“Their strategy to capitalize on the ‘Me Too’ movement for the political purposes backfired on them,” Republican strategist Alice Stewart said of Democrats. “The fact that they were willing to use Dr. Ford’s story that was uncorroborated to launch character assassinations on Judge Kavanaugh did not sit well with voters. A lot of people looked at this as a bridge too far.”

The surge in GOP enthusiasm could recalibrate a political landscape that was tilting toward Democrats throughout the summer. Though Democrats still maintain an advantage in competitive House races, the past two weeks appear to have shifted momentum in the fight for the Senate majority back to the GOP.

In North Dakota, Republican Rep. Kevin Cramer has pulled comfortably ahead of Democratic Sen. Heidi Heitkamp, who voted no on Kavanaugh. GOP operatives say they’re also seeing renewed Republican interest in states like Wisconsin, where Democratic candidates for both Senate and governor have been polling strong.

To be sure, some tightening in the race was likely inevitable this fall. Wavering voters often move back toward their party’s candidates as Election Day nears, and most of the competitive Senate races are in states that voted for Trump by a significant margin.

With just over four weeks until Election Day, there is still time for the dynamics to shift again. And the political headwinds from the Kavanaugh confirmation are unlikely to blow in just one direction.

To Democrats, Kavanaugh’s assent to the Supreme Court in spite of decades-old sexual misconduct allegations will only deepen the party’s pull with female voters, including independents and moderates who may have previously voted for Republicans. Democrats point to the flood of women who have spoken out about their own assaults following Ford’s testimony before the Senate Judiciary Committee. Party operatives also believe the optics of the all-male GOP panel that presided over the hearing struck a chord with female voters.

“Kavanaugh’s confirmation will leave a lot of outraged and energized women in its wake,” said Geoff Garin, a Democratic pollster.

Democrats argue that some of the same tactics that have helped energize Republican voters also motivate their base, particularly Trump’s attacks on Ford. During a campaign rally in Mississippi, the president mocked Ford for not remembering key details of the alleged attack, including the date and location of the party she says she and Kavanaugh attended 36 years ago.

“You’ve seen some shifts, but I still think that we’re in a strong place,” said New Mexico Rep. Ben Ray Lujan, who heads the Democratic Congressional Campaign Committee. “I still think that it gives us a lot of enthusiasm on our side because there are a lot of people out there that are really upset, not just with the testimony that came from Judge Kavanaugh but the way the president was even mocking (Ford) days ago.”

Trump remains the fall campaign’s biggest wildcard. White House advisers and Republican senators are encouraging him to keep Kavanaugh in the spotlight in the campaign’s final weeks. But they’re well aware that the president often struggles to stay on message and can quickly overshadow his political victories with new controversies.

Given that, Stewart said Republicans can’t assume that this burst of momentum will sustain itself through Election Day.

“The question is whether this is the October surprise or the calm before the storm,” Stewart said.

This Article first appeared at www.onenewsnow.com