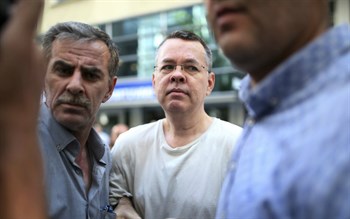 An American pastor who has been held in prison by the Turkish government for two years should be on his way home to the U.S..

Pastor Andrew Brunson, a North Carolina native, is free to leave Turkey and return home. In his own words today: “This is the day our family has been praying for – I am delighted to be on my way home to the United States. My entire family thanks the president, the administration, and Congress for their unwavering support.”

Brunson, 50, had suffered for his faith in prison and then house arrest at the hands of Turkey, America’s NATO ally, since October 2016. During a hearing today, a Turkish court convicted him on an alleged “terror charge” before releasing him; a charge of espionage against him was dropped. He had faced charges that could have resulted in 35 years in prison.

“The prayers of thousands were answered today when Pastor Brunson was released by the Turkish government and told he could go home to the United States. Those prayers – combined with the unwavering resolve of President Trump, Vice President Pence, Secretary Pompeo and Ambassador Brownback – brought tangible help to Pastor Brunson and hope to those around the globe who are being persecuted because of their faith.

“Pastor Brunson was also well represented legally by our friends at the American Center for Law and Justice,” Perkins adds, “and we commend them and their attorneys for the outstanding work they did on behalf of Pastor Brunson.”

The American Center for Law and Justice had been working in the U.S. and abroad to secure Brunson’s release. “President Trump and his team have been tenacious in seeking the release of Pastor Brunson,” says Jay Sekulow, chief counsel of the ACLJ.

“We’re grateful to the President, members of Congress and diplomatic leaders who continued to put pressure on Turkey to secure the freedom of Pastor Brunson. The fact that he is now on a plane to the United States can only be viewed as a significant victory for Pastor Brunson and his family.”

Dr. Jerry A. Johnson, president and CEO of National Religious Broadcasters, also is crediting the Trump administration for its role in obtaining the pastor’s release. He singles out the president, Vice President Mike Pence, Secretary of State Mike Pompeo, Ambassador Sam Brownback, and Senator Thom Tillis (R-North Carolina). “[They] refused to take ‘no’ for an answer for this man’s release,” says Johnson. “This administration stayed true to its citizen.”

“May the Lord strengthen Pastor Brunson and his family as they work to turn the page on this difficult chapter in their lives,” Johnson adds. “And may God protect and give peace to our other brothers and sisters in Christ who continue to endure hardships and severe persecution around the world because of their faith in Him. Let us never forget them!”

Dede Laugesen, director of Save the Persecuted Christians, strikes a similar tone in her remarks today.

“This has been a long road of persecution for Pastor Andrew Brunson,” says Laugesen. “We are joyful and so thankful for Pastor Brunson’s long-awaited freedom. We praise God for this wonderful turn of events and thank the many people who worked on his behalf, including high-ranking officials within the Trump administration and influential and committed attorneys.”

“Despite the joy we feel today, we must never forget there are millions of Christians who are not free to believe in Christ. Many remain jailed, persecuted in their own communities or even shunned in their own homes. We pray all will someday experience the freedom Andrew Brunson is savoring today.”