At a cost of over $1 million a 60 year old veteran’s memorial cross, that had never before been controversial… 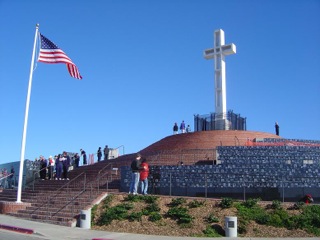 At a cost of over $1 million a 60 year old veteran’s memorial cross, that had never before been controversial appears to be protected from anti-Christian bigots who tried to force its removal from a cemetery of 4,000 veterans.  The cross at Mt. Soledad was erected in 1954 as a memorial.  This article looks at the battle and victory, though its defense is one our founders would be saddened to know was required.  Basic religious freedom once understood and tolerated, is now costing a great deal. Read more here: http://sonsoflibertymedia.com/2015/07/free-exercise-of-religion-now-costs-a-cool-1-4-million/