America lost one of its greatest heroes of the post WW2 era when 89 year-old. Rear Admiral, Jeremiah Denton passed… 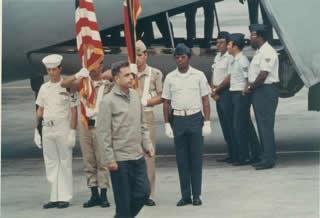 America lost one of its greatest heroes of the post WW2 era when 89 year-old. Rear Admiral, Jeremiah Denton passed away March 28th.  The former US Senator may have been best known from to his book, “When Hell was in Session” that also became a TV movie.   Denton had been a POW in the Viet Nam war.  He suffered numerous brutalities at the hands of his captors.  Unbroken, he sent a message back home to the US through blinking his eyes in Morse Code on television.  This article describes one of his last interviews in which he describes his time in captivity and the role his faith played in sustaining him.  Read more here: http://www.wnd.com/2014/03/war-hero-reveals-secret-of-enduring-trouble/?cat_orig=faith