As they open their new A&E TV season with a record setting viewership numbers of nearly 12 million Americans, Duck… 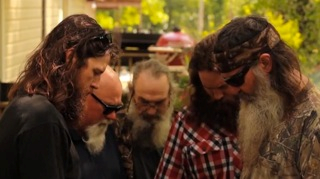 As they open their new A&E TV season with a record setting viewership numbers of nearly 12 million Americans, Duck Dynasty appears to have struck a nerve of appeal and even normalcy that a core segment of Americans seem to long for once again.   The reality show portrays the interactions of a family of long haired, camo-wearing guys who run a duck call company in Louisiana.  What drives and forms the family is their clear and obvious Christian faith.  Still, with each new season, more people seem attracted to the show.  The show’s huge popularity has led to large sales of T-shirts and several books from family members.  One of the many unique regular characters on the show is Uncle Si who often offers his words of wisdom and sayings.  In this article, Uncle Si explains what truly drives him.