Top-Ranked Senior Says He Shouldn’t Be Forced To Pray GREENWOOD, Ind. — The American Civil Liberties Union of Indiana will… 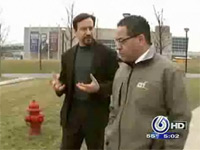 Top-Ranked Senior Says He Shouldn’t Be Forced To Pray

GREENWOOD, Ind. — The American Civil Liberties Union of Indiana will seek an injunction to stop a prayer planned at the Greenwood High School graduation ceremony as part of a lawsuit filed by a top-ranked senior.

The suit by 18-year-old Eric Workman said the prayer and a vote taken by students at a school assembly in September unconstitutionally subjects religious practice to majority rule, 6News’ Rafael Sanchez reported.

“(The vote) was unconstitutional,” said Ken Falk with the ACLU. “You should never put someone’s religious beliefs to a majority vote.”

The law firm that represents the school district said on Friday that it had no knowledge of the suit, but said that the district does not promote school prayer.

The American Family Association of Indiana opposes the legal challenge.

“We tolerate different points of view, but to silence people because you disagree with them is unfortunate,” said spokesman Micah Clark.

< Click here to watch video of this news story >