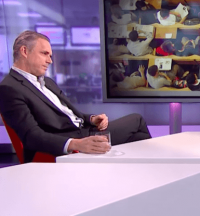 Last Friday, The New York Times ran a disgusting hit piece against Canadian psychologist and university professor Jordan Peterson. Reminiscent of the infamous interview with British journalist Cathy Newman from January, Times writer Nellie Bowles forced Peterson into her own preconceived idea of a sexist patriarchal bully and slandered him with every paragraph.

Bowles’s headline said it all: “Jordan Peterson, Custodian of the Patriarchy.” Many rushed to Peterson’s defense, but the psychologist himself took the attack in stride.

While Peterson took the attack in stride and criticized some of his defenders as having a “conniption fit” about the story, in the interest of his eighth rule for life (“tell the truth — or, at least, don’t lie.”), I have decided to respond to Bowles’s smears on his behalf. My wife and I have read and thoroughly enjoyed his best-selling book, “12 Rules For Life: An Antidote to Chaos,” and consider the Times piece a violent misunderstanding of Peterson’s philosophy. […]