Most recently, evangelical leader Paula White – who serves as a member of the advisory board on the White House… 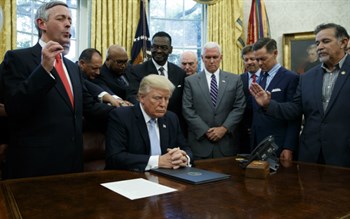 Most recently, evangelical leader Paula White – who serves as a member of the advisory board on the White House Faith and Opportunity Initiative, which is being established by Trump’s new executive order – described the president as America’s greatest champion of Christianity and religious freedom in modern history.

“He is the most – as many people have said – the most faith-friendly president that they have known in their lifetime,” White told CBN News. “We had over 1,800 faith leaders come through the White House alone. I believe this year we will double or triple that, so he continues to reach out first and foremost in prayer.”

“I will soon be signing an executive order to create a faith initiative at the White House,” Trump announced, according to CBN News. “The faith initiative will help design new policies that recognize the vital role of faith in our families, our communities and our great country.” […]