Like it or not, social media is the communication form of the future — not just in the U.S., but… 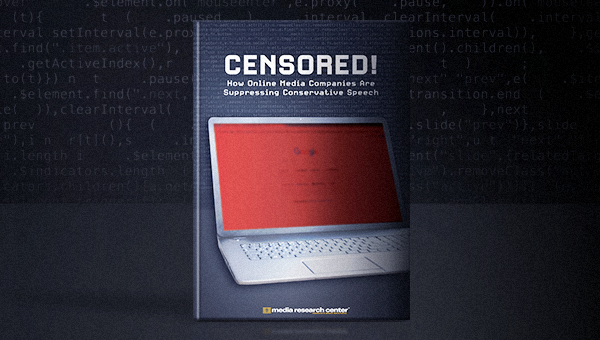 Like it or not, social media is the communication form of the future — not just in the U.S., but worldwide. Just Facebook and Twitter combined reach 1.8 billion people. More than two-thirds of all Americans (68 percent) use Facebook. YouTube is pushing out TV as the most popular place to watch video. Google is the No. 1 search engine in both the U.S. and the world.

It’s the new battleground of media bias. But it’s worse. That bias is not a war of ideas. It’s a war against ideas. It’s a clear effort to censor the conservative worldview from the public conversation.

The Media Research Center has undertaken an extensive study of the problem at major tech companies — Twitter, Facebook, Google and YouTube — and the results are far more troubling than most conservatives realize. Here are some of the key findings:

Tech Companies Rely on Anti-Conservative Fact-Checkers: Facebook and Google both had partnered with fact-checking organizations in order to combat “fake news.” Facebook’s short-lived disputed flagger program had allowed Snopes, PolitiFact and ABC News to discern what is and is not real news. Google’s fact-checkers had accused conservative sources of making claims that did not appear in their articles and disproportionately “fact-checked” conservative sources. On Facebook, a satire site, the Babylon Bee, had been flagged by Snopes for its article clearly mocking CNN for its bias. YouTube also had announced a partnership with Wikipedia in order to debunk videos deemed to be conspiracy theories, even though Wikipedia has been criticized for its liberal bias.

Recommendations For The Tech Companies: