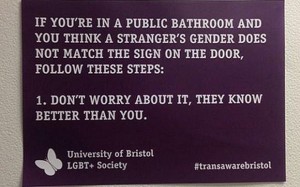 South Dakota has gained attention with its legislature passing a bill to protect the privacy rights of women, children and students from gender-confused males who attempt to use women’s restrooms, showers or locker rooms.   The liberal media is spinning this as an attack on a few individuals by tending to ignore the law’s provisions for options for the sexually confused.   AFA of Indiana promoted similar legislation in the Indiana House and Senate more than a month ago, and we will continue to defend the God-ordained natural boundary of gender and parental rights to protect children.

SAN FRANCISCO (AP) — In clashes over which restrooms and locker rooms transgender students should use, the U.S. Department of Education has warned public schools that a 1970s sex discrimination law makes it illegal to deny them access to the facilities of their choice.

Schools around the country, some fearing federal investigations that could cost them millions in funding, generally have yielded to the guidance. Now, a backlash is brewing.

The South Dakota Legislature last week became the first to pass a bill that would require transgender children and teenagers to use the school facilities that correspond to their “chromosomes and anatomy” at birth. Lawmakers in at least 22 other states have introduced similar legislation at odds with the government’s interpretation of the U.S. law, the Human Rights Campaign said in a policy brief Monday.