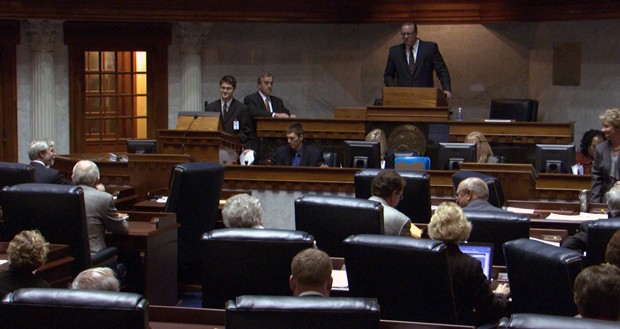 **This article is from AFA of Indiana’s Weekly eAlert**

I do not take any comfort in what I am about to report to you today.  I encourage you to please take a moment to read this so that you can be informed and judicious in this election.  As always, I am going to shoot straight with you regardless of the criticism I may take for it. Please know, not all incumbent politicians are engaging in the tactics I am describing.  I have spoken with several who are stunned by what I am about to share.  These are examples of what you should look out for with your own candidates.

You would like to think that some of the shenanigans going on in the national presidential races were limited to the oddities of Donald Trump or Bernie Sanders or to various efforts (both wise and foolish) to thwart them in their strong candidacies.  Yet,Hoosiers need to be very discerning and cautious when it comes to voting in state elections as well.

There is little doubt, based upon the campaign advertising I am already seeing, that even though the GOP establishment often governs otherwise, they know that religious liberty, life and marriage are pivotal issues with Republican primary voters.

Senate President David Long has a large ad buy on talk radio in Fort Wayne.   In his ad he says that he is a defender of religious liberty and the right to life.    This may come as quite a shock to many who remember that it was Senator Long who single-handedly killed the marriage amendment in 2014 by refusing to restore its language to the version that would allow Hoosiers to vote upon that issue.

He even punished Senator Mike Delph and stripped him of his committee and leadership positions because Delph publicly demanded that Hoosiers be allowed to vote on the issue that November.  Sen. Long also jumped down Curt Smith’s throat in committee when IFI’s director simply asked that the 2nd sentence be added back in so Hoosiers could vote on the matter.   Marriage is now the primary issue upon which people of faith are being punished, harassed, fined and even jailed.

More recently, in this session, it was Senator Long more than any other Republican (with the exception of Senator Travis Holdman) who was bowing to the homosexual lobby by pushing a special rights bill that could have singled out, silenced or punished Hoosiers because of their peaceably held religious beliefs.

Sen. Long lobbied for SB 344 both publicly and behind the scenes and helped it pass out of his committee. Had a majority of Senate Republicans not refused to support SB 344, it would have passed. I’ll be charitable in noting that, in and of itself, this is not disqualifying. It could be said that the issue needed to be debated.  However, upon its defeat, a disappointed Senator Long told the media it would come back next year and would pass someday.   Are those the promises of a defender of religious freedom?

Many people praise Senator Long for allowing some pro-life legislation through the Senate.   It is also true that Senator Long has a 95% pro-life voting record with Indiana Right to Life (21 of 22 life votes).   However, former Democrat Speaker of the House Patrick Bauer has a 100% pro-life voting record (23 of 23 life votes).  Yet, you’ll never hear him praised by right to life leaders.   Why?   While he has voted pro-life every time on bills on the floor, behind the scenes he often used his enormous power to kill pro-life legislation.

Senate President David Long has done exactly the same thing to pro-life bills as Representative Patrick Bauer did.   Three years ago he announced to the media that Senator Jim Banks‘ sex-selection abortion bill, drafted by Americans United for Life attorneys, was unconstitutional and dead on arrival.

This year, Senator Long buried another bill right out of the box without a hearing. Senator Banks authored a bill that would have made it illegal to abort a baby if a heartbeat was detectible.

Senator Long had to be persuaded to support Senator Scott Schneider’s amendment to defund Planned Parenthood a few years ago. That persuasion came from the realization that the bill had the support of a majority of the GOP caucus.

I am not saying that Senator Long is not pro-life, but the reality is any Republican Senate President or Speaker of the House has to be pro-life in order to keep their position because 80-90% of the GOP membership is pro-life.    I am not sure if that makes one a true-life champion or simply a shrewd politician.

Speaking of life, how low do we set the bar?  My own Senator, Luke Kenley, is making a point of telling voters that he has “a strong pro-life voting record.”   That “strong” record is a 65% percent one.  I am glad he is saying he is pro-life, but this is one of the lowest percentages of any Republican in the entire legislature.

Senator Pete Miller is handing out flyers that claim he “supports traditional marriage.”  Yet, he was one of only a few Republicans who voted against the Marriage Protection Amendment.

Senator Miller told the media he opposed the Marriage Amendment not because it wasn’t strong enough or wouldn’t go to the ballot in 2014, but because preserving marriage as it always has been, (a gendered institution between a mom and a dad), is injurious to homosexuals.  Sen. Miller said, “What’s to be gained other than ostracizing a whole section of the population?”   Well Senator, we now have homosexual marriage for less than 3% of the population forced upon Indiana.  Who’s being ostracized now because of that?

I have nothing personal against any of these three Senators, but I have a duty to educate and inform you of what really goes on in the Indiana legislature and, when necessary, how that may impact you as a voter.

I also have to wonder why some pro-family and pro-life activists are silent about this, or perhaps, worse, agree with and repeat such politicians’ claims.   I understand not knowing what really happened, or the fear of upsetting elected leaders and being shut out by those in power.  Still, if we as leaders turn a blind eye, then voters may also accept low standards for the very important advertising banner of defenders, champions, or strong supporters of life, marriage and religious freedom.   I do not want those labels cheapened or marginalized.

I know that when you vote you want your votes to go for true defenders, champions and supporters of life, religious freedom and family values.   That is why AFA-IN is working with IFI and Advance America on voter’s guides.  Indiana Right to Life’s voting record site is here:  http://indianalife.mindblurp.com/html/bills/legislators.asp

In most state races you don’t have any primary choices as most incumbents do not have a challenger.  Still, I would encourage you to research bills and voting records at the Indiana General Assembly web site. Take the time to investigate the claims made by all your candidates before you cast your vote.

Sign up to Receive AFA of Indiana’s Weekly eAlert